What’s your professional area activity?
I am a recruiter by day and an activist by night.

Is it link to your project in a way?
No.

What’s your project?
I don’t have a specific project in mind, because the past few years I was part of different projects and campaigns, from which I learned a lot: protests for Rosia Montana, anti-fracking, Stop TTIP, deforestation, non-formal education projects.

When did you start?
I started to be more involved and aware of what is around me as a student at the Faculty of Philosophy, here in Bucharest, together with few colleagues, we started a student association, PHILOS, the purpose was to fight for students rights and help solve some of the problems we identified in the Faculty at that time. My awareness as a concerned citizen increase with the protests for saving Rosia Montana and with the community United We Save (#unitisalvam), from there I started to get involved in different project, campaigns, to be always informed about what the Government is doing. 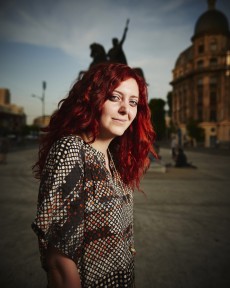 I think this is what more people should do, be more involved in the civic society the way the can and have time (do volunteer work for NGOs, start campaigns, grassroots initiatives, monitor the political parties and the laws given, take a stand whenever is the case to do so). I know it’s hard to do this when you probably have a 9 to 6 job, but you can still be informed, sign petitions, do some 2-4 h / week volunteer work, donate money to different grassroots initiatives etc.

How was the idea born?
My idea is that civic involvement should start from education and from grassroots communities. The idea was born during the protest for Rosia Montana, After that I started with my NGO, Edelvais Association, to do different projects for young people and high school students. We started working with them to be more involved, in the communities, at home, in the civil society, for them to do more volunteer work and to stand up for their rights. We worked with them so the change can start from them.

I imagine a country where people are day by day more involved, more aware, more engaged in the civil society. I imagine that they are not indifferent to that is around them, that they can take action when their rights are being violated, when their politicians to not respect what they promised during elections, when corporations put their profit first and violate people’s rights and the environment. I want to create communities, strong communities that will take a stand when something like that happens..

What’s next, what do expect? Any more details?
I learnt a lot from the protests that were in Romania during 2012 – 2016, but also I know the Romanians do not have a culture of protest. I expect to learn more about activism and new ways to engage people in civic movements. To do that I have some plans for the near future.
Here is a small video from a project we did: https://www.youtube.com/watch?v=5xqCoK15wdM&feature=share