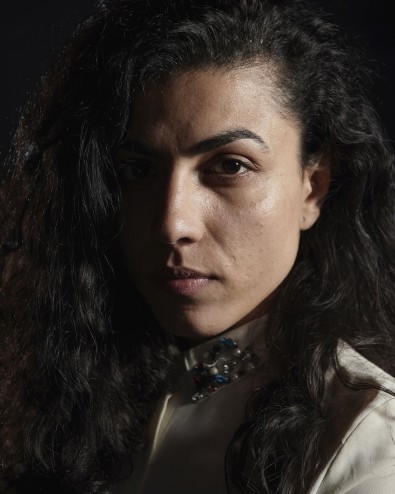 I made Mihaela Dragan’s portrait after theater play at Macaz, a small bar –theater in Bucarest, between an open discussion with kids about feminism, representation of the Roma community, freedom, education… and another foreigner interview.

When I ask Mihaela to answer my questions she told me that she is too busy, that I should to do my job and look on the internet for other interviews. She has a strong temper. Well, I’m not a journalist, but in the actual context of Romanian media, it’s fair enough. And this gives me the occasion to treat differently than usual the content of a Ro Activ portrait, which is pretty cool.

The Giuvlipen Theater Company was founded by two actresses Mihaela, Zita Moldovan, but collaborate with many other comedians. Guivlipen means feminism in the Romani language, a word the two of them created from the combination of two Romani words, the tittle of the company is pretty explicit. I invite you to visit their Facebook for more information. Let’s still summarize the concept, the actresses write, produce and perform on stage real life stories of Roma women, in order to the empowerment Roma women, also change the way that their communities treat them and the vision of Romanians people about them… They don’t only play on stage they also teach acting to women in vulnerable communities to empower them.

The two founders have always face disrespect, machismo, racism, on stage and in the society. And one day Zita get upset and came with the idea, acting for her, for Roma women, for all the women and the ones that face discrimination. Using the stage to open peoples’ eyes, share idea about feminism and make people aware of the situation for many Romani women stuck between traditional expectations of their community and modern European way of living. It’s the same identity problem than for all the women in the world, but with the increased complexity considering the fact that the Romanian society doesn’t Romani people to emancipate.

As many artists before, they are clearly criticizing social injustices, relying on the quality of the performance. And it works. The theater play I saw was “Who killed Szomna Grancsa?” where we follow the reaction of an entire village after the suicide of a young studious Roma girl. I don’t need to tell you that it’s pretty dramatic, but through empathy, the actresses are painting a realistic portrait of the society, where no one is victimized or glorified. It’s sarcastic, even sadly funny sometimes, but though the quality of the play the reality comes open peoples’ minds.
I could see from the way they discussed with the kids at the end of the play that it really matters to them, and they like what they do. But it’s not always easy. Of course the company is independent and often performs in small, open mind theater. What did you expect, it’s already hard in general for small theater companies to find founding and location so for a Roma company in the Romanian cultural system, it’s kind of hell. And Romania state does not help Roma community, so there no reason for expecting to have a budget for Roma cultural project in this situation. Furthermore, in this environment, the actresses have to prove every time their legitimacy even with their university degree in acting, their portfolio more than the others and the fact that Zita have a TV show.

Since some months the company has been under the spotlight of many media, and I hope it will help them to reach their goal.